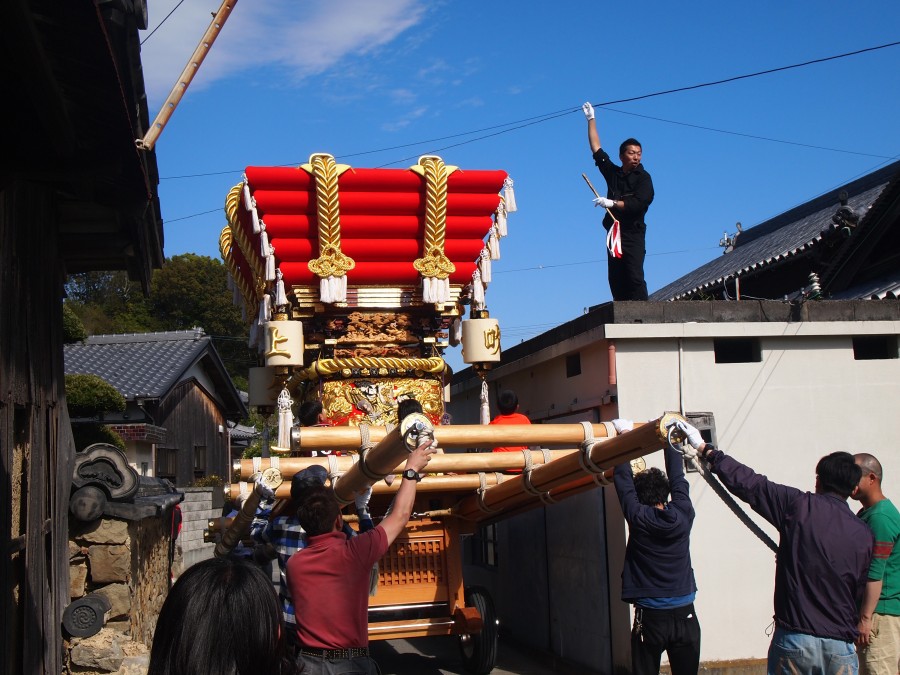 Our first experience of our local matsuri (festival) . There is kind of a group of villages which all fall under ‘Ama’. There are 15 groups and this is our local group’s ‘danjili’ . A danjili in this case is a two wheeled cart with a frame made of logs. there is a big drum inside played by 4 small boys who are surrounded by eloborate embroidered curtain so you cant see them. on top is what looks like 5 giant cushions.

The Danjili lives all year round in a big shed near our local jinja (shrine) . It reminds me of the oven in the children’s book the giant jam sandwich.

On the Saturday the gang of local men (under the age of forty) start to drag it around town. the first street is quite narrow and this guy had to stand on the roof so the cables wouldnt get in the way. Our street is actually one of the wider ones in the village and i wonder if thats because this danjili has to fit down it. They didnt used to have cars so some streets are very narrow. 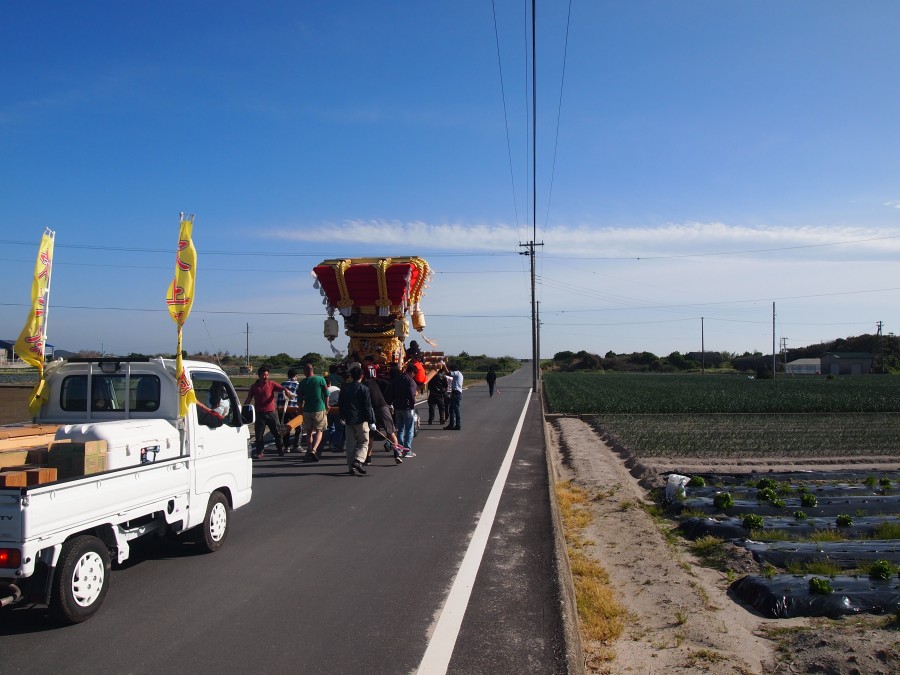 So still on Saturday, they marched it round the village and down to the beach where there is another little shrine thingy. This white truck carries the chocks to stabalise the danjili when its stationary and importantly, the alcohol and soft drinks!

And they sang one of their three songs, banging their wooden stick things, with the boys in the danjili providing the bass drum beat. the ‘songs’ have some very emotional acting/ kinda little plays and choruses. I didnt understand any of the words but I got some of the emotions! Its all perfomed standing up though, on steps, they dont move around.

Some people in the village came along to watch. These ladies must have seen it dozens of times, with each generation. 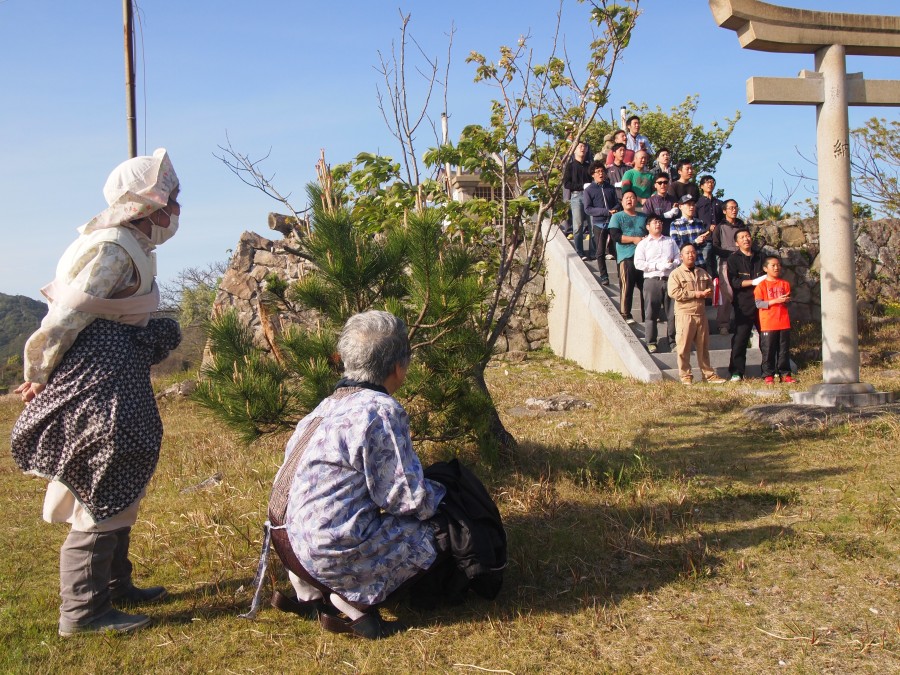 After that they walked it back along the seafront and on to another road where they practised running fast with it. They performed a few more times in different locations, with villagers coming out to watch at whichever stage was convenient for them. 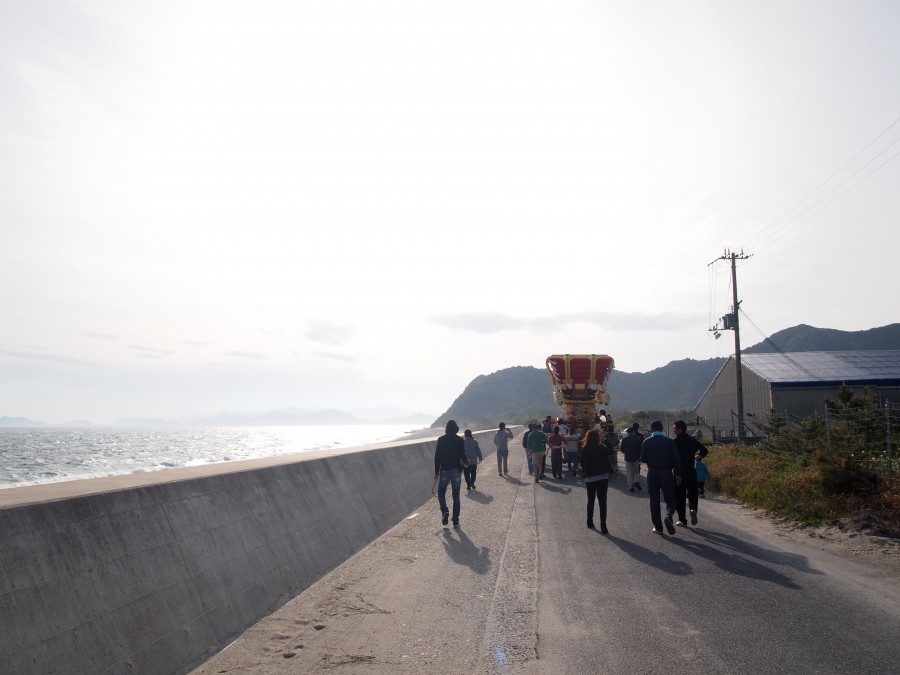 On the Sunday they started early, 7am? and dont bring the danjili back till after dark 8pm? lots of drinking is involved. And a big long lunch with more booze. 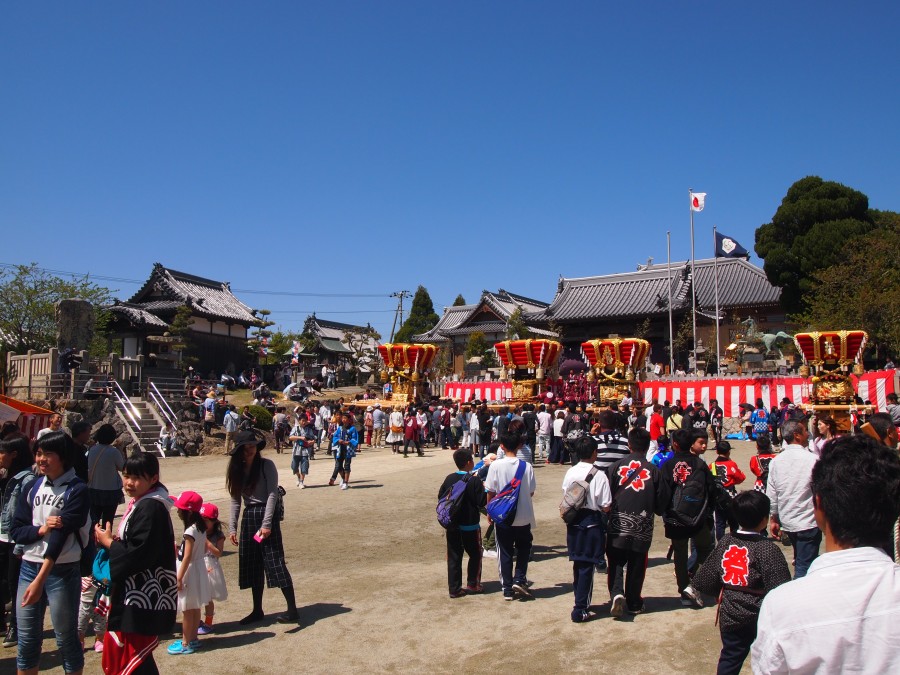 When I got to the main shrine (a 40minute walk) most of the other group’s danjili had arrived. The place was packed with people and each team of men and some kids were wearing their hapi (festival costume) so you could identify which group they belong based on the colours they wore. The Danjili all look very similar to my untrained eye. 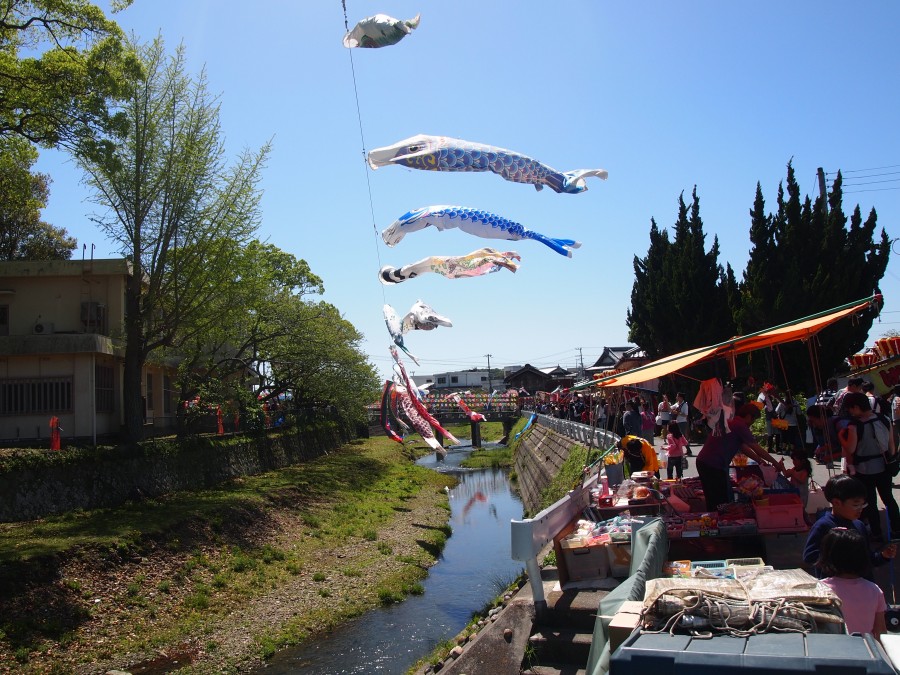 There were lots of market stalls selling toys, food and drinks. Everyone was out, which was nice, because I often feel people are a bit hidden away in their houses and cars. The koi nobori (carp wind socks) were out above the river ready for boys day (may 5th) 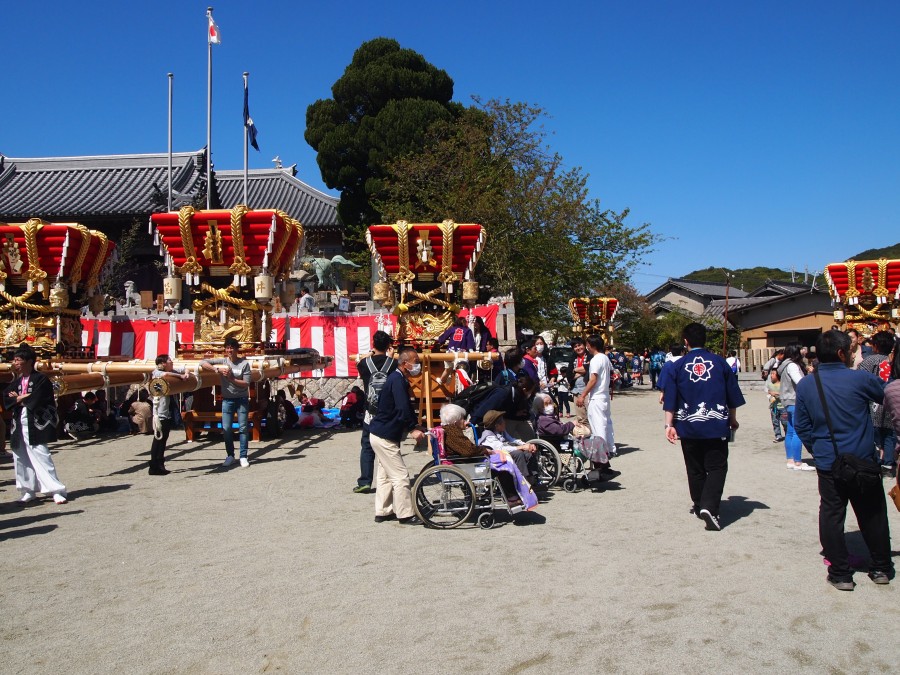 I like to see the old folk out in their wheelchairs too. (cos of my old job in a care home) 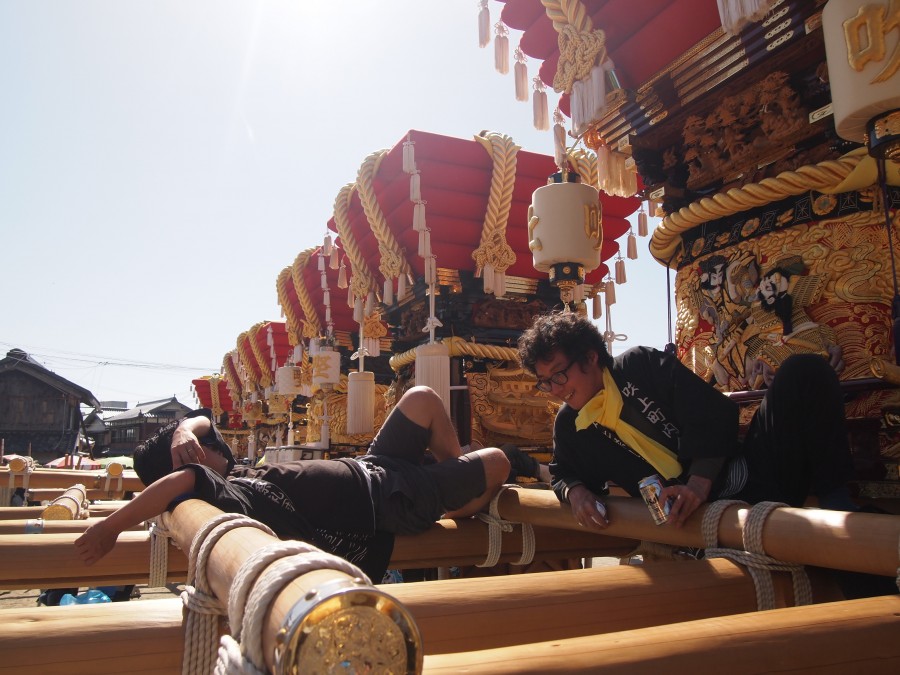 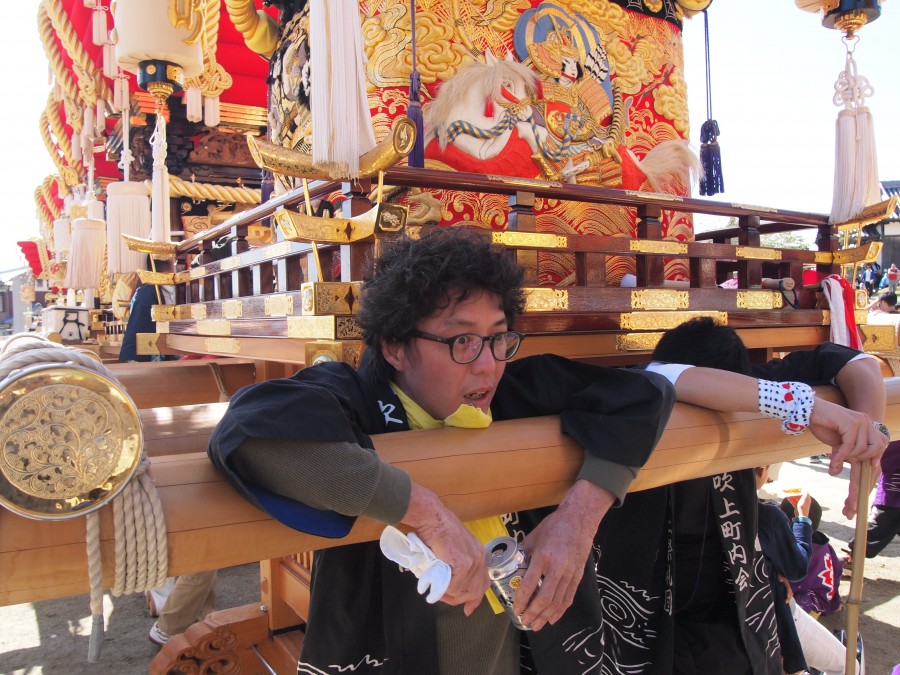 This year everyone said it was gonna rain, but it was really hot! 27 degrees i think. like best English Summer, but in April. The men are tired and hot and drunk, but still have lots of work to do. waiting for each group to sing their song. it goes on for hours and hours, 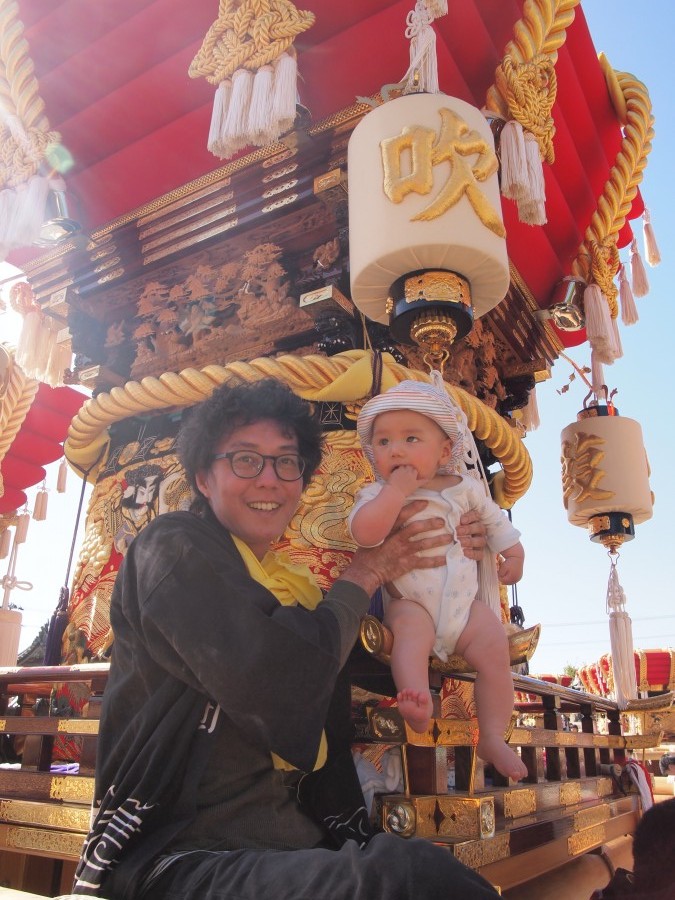 In 5 years our little boy can bang the drum inside, in 20 he can do the pushing?! will we still be here then? who knows.

I recommend Ama matsuri for a glimpse of Japanese traditional festival.