I painted a massive mural on our new workshop/dyeing studio, AiAii in Sumoto on Awaji Island, Hyogo, Japan.

It was really fun. I love painting big stuff. 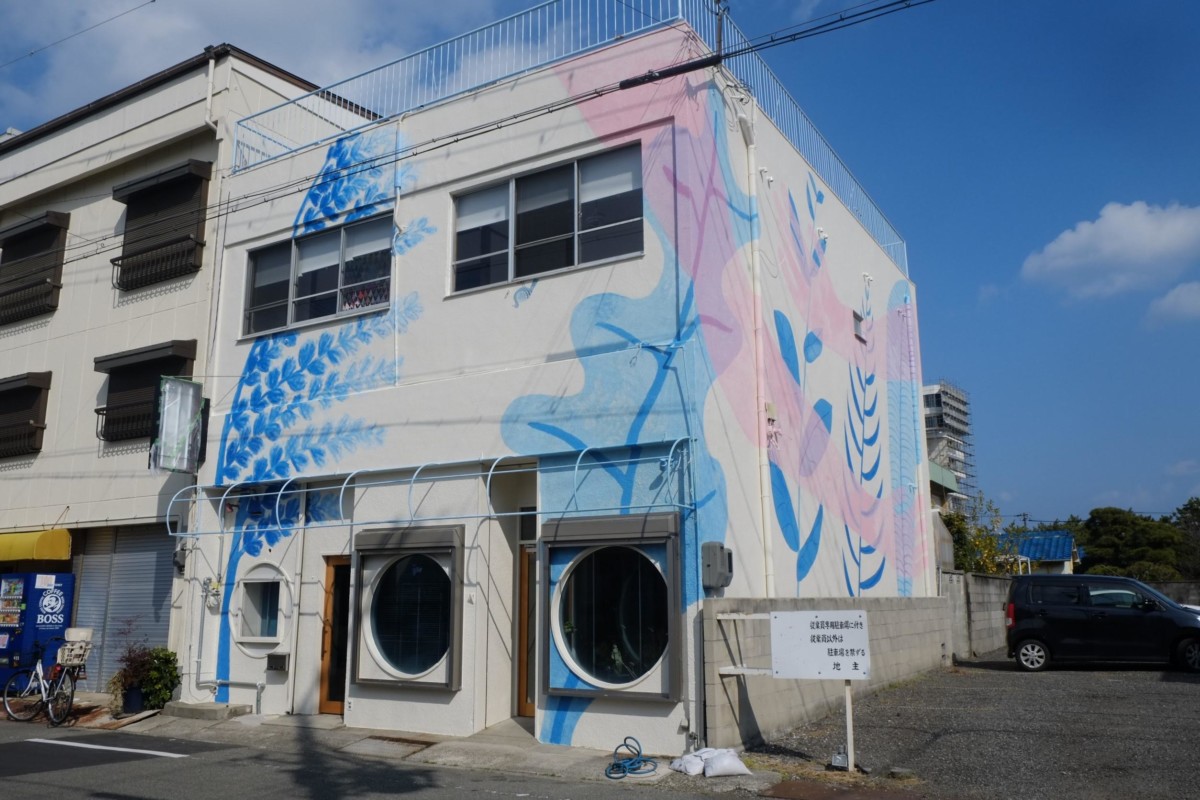 I did some sketching to start with, but there just wasn’t enough time to look around for different ideas, so I decided on the basic shape and concept early on. I didn’t want It to be an explicit advert for a dyeing studio. I just wanted it to be something fun and appealing. I didn’t want it to be too shocking or hideous for our elderly neighbours, as we are in a mixed residential and touristic neighbourhood. So I settled on some natural themes, shapes, albeit with bold and jazzy colours. Below is the 2nd to last drawing I did. It helped to stand the paper up the same shape as the real building. 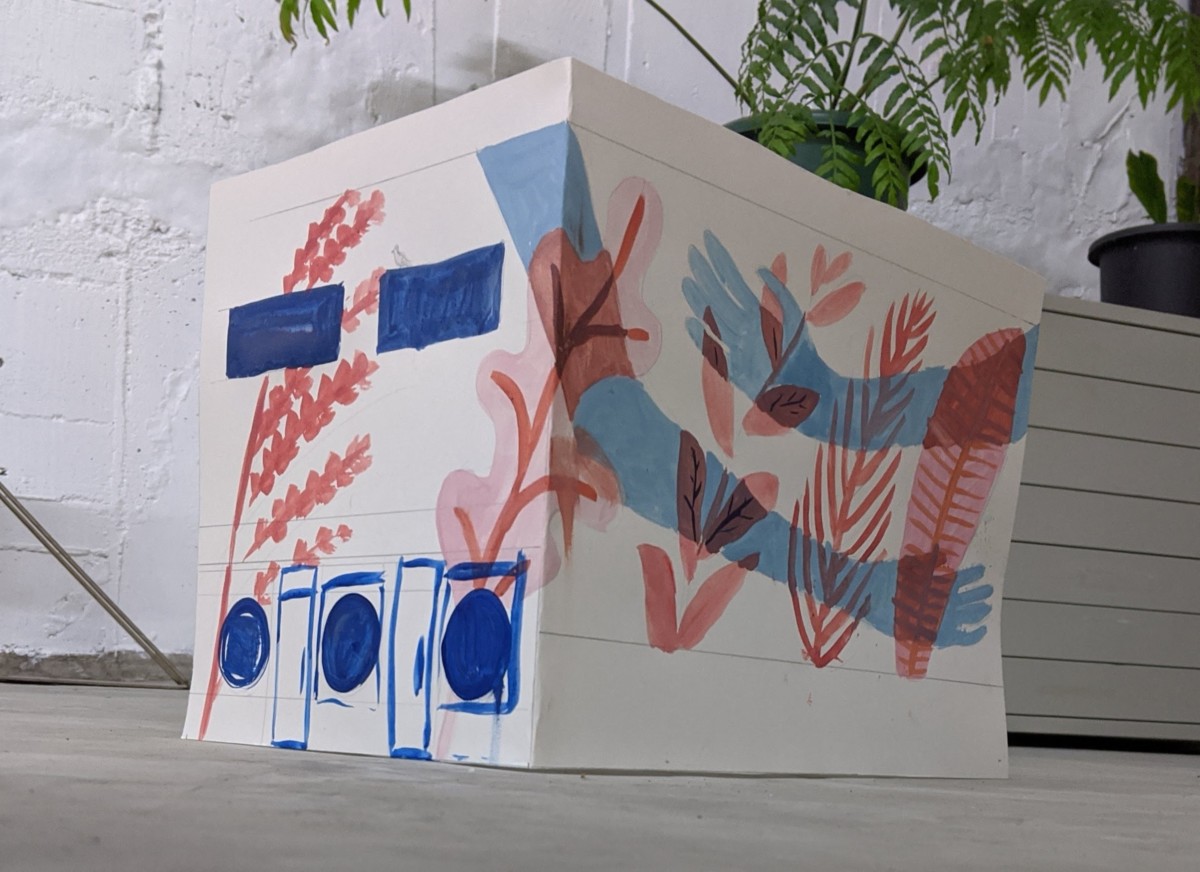 I like to make art where something is slightly off, and where the medium is in contrast with the content. For example a soft fluffy weaving of a ceramic jug. A painting on a rocky wall of silky flowing hair. My world is colourful but as I see it my ‘bright’ colours are all completely natural. When I dye with natural indigo my arms are blue. When the sun sets the sky might be pink and orange. In the real world trees are often not green and the sea is often not blue.

In this mural the arms are wrapped around the building or the leaves. Scooping up the leaves or gathering the building in a hug. Its up to you to decide. The leaves are as large as trees. I like how microscopic tiny veins on a leaf can follow the same pattern as the largest tree you can imagine.  I wavered between having the arms interwoven (I love weaving)  with the leaves or ‘see through’ kind of overlaid like a giant screenprint, with colours showing through.

I was keen on the idea of having blue arms and this being the hint to the building being a dye studio. I also like having blue arms because it stops Japanese people commenting on the ‘whiteness’ of my skin. (a complement). However, We went with pink arms and blue plants in the end. The middle plant on the finished mural is loosely based on the Japanese indigo plant. 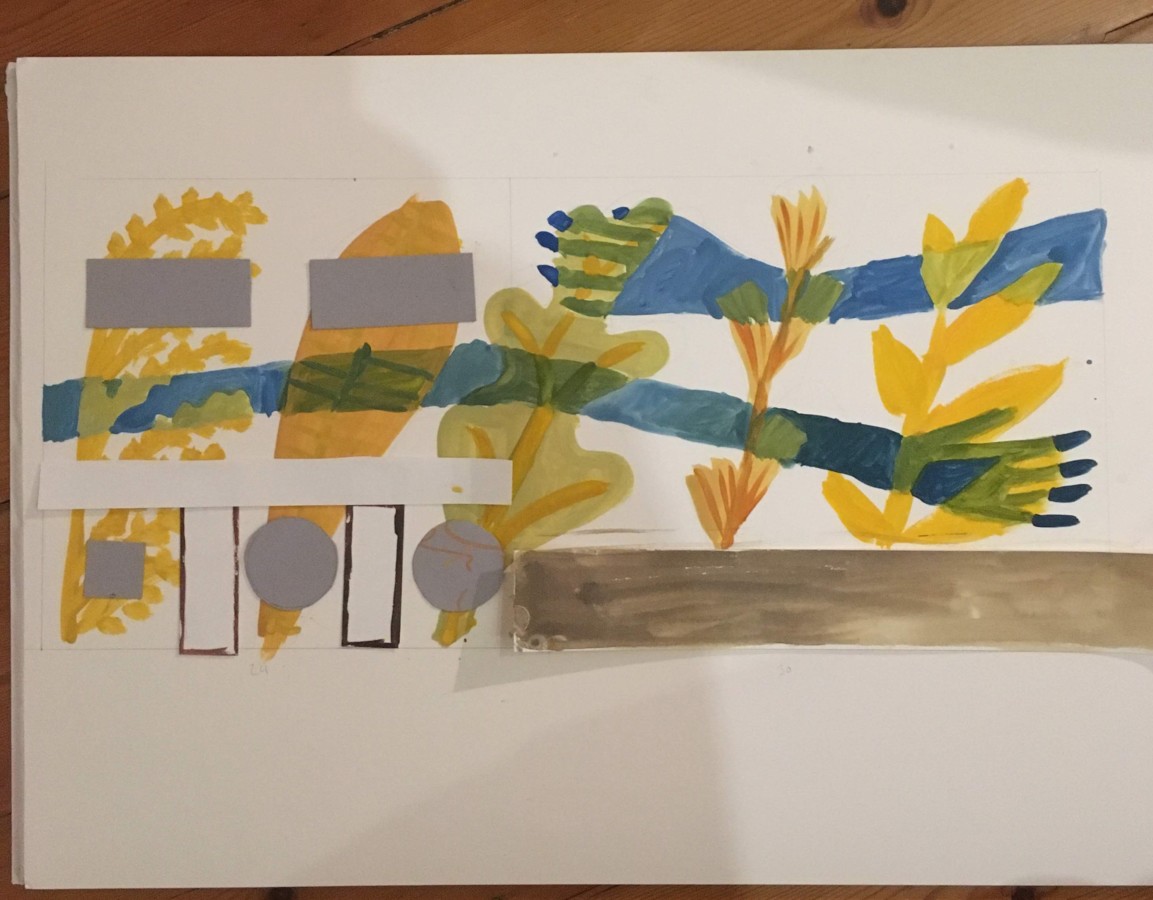 The earlier designs had the arm coming right over the front of the building but we decided (with help from Miranda, thanks) it was too busy, with all the windows and doors. 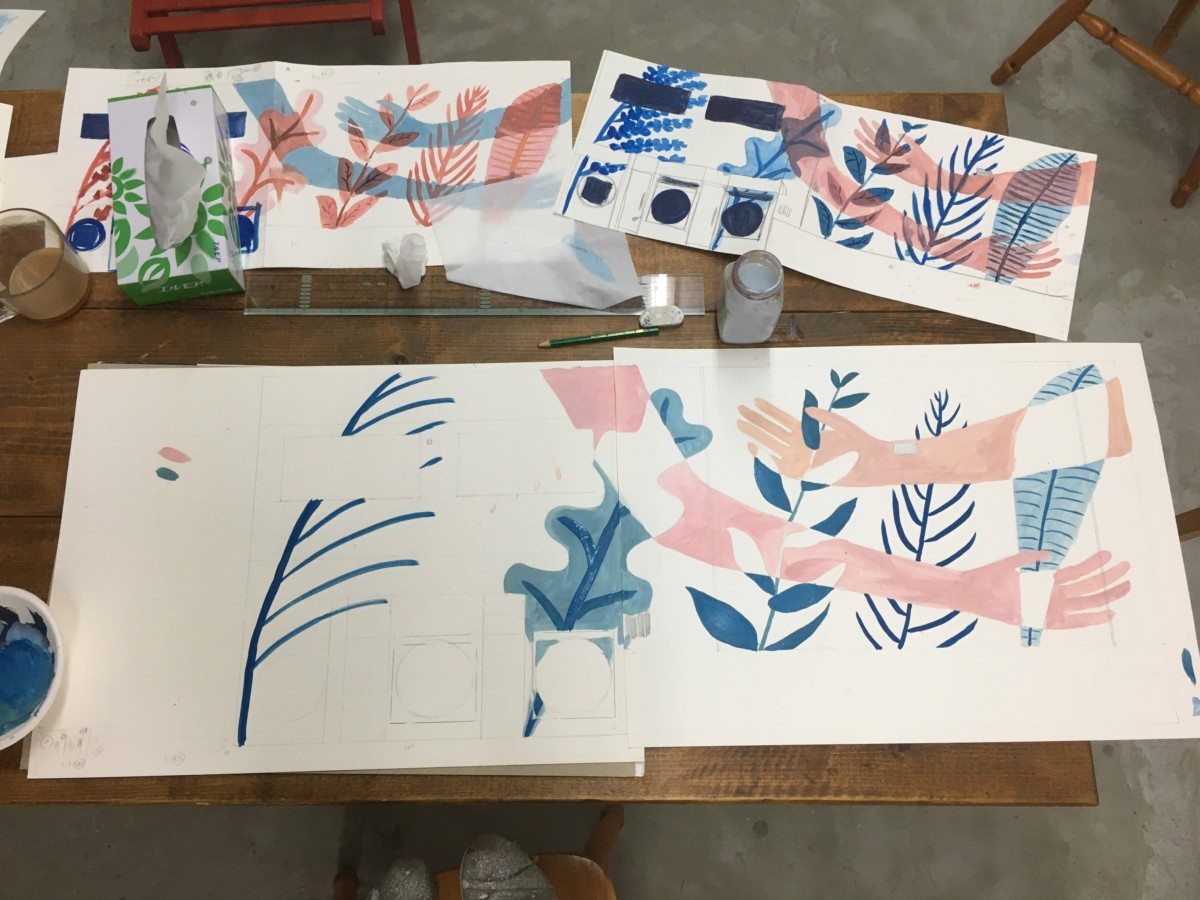 We had cracks in our walls so called in professionals to fix it and use some kind of oil-based stretchy thick silicone paint. (it stretches over cracks) while the scaffolding is up – its my chance to paint. I used oil paints from our local paint shop that mix you up any colour. I just bought red, white, pink, yellow and blue. You always need so much more white than you think! It makes me wince when I see murals and the colours are too deep. We found using small rollers was so much quicker than paintbrushes.

So once  the design and colours were agreed upon, I did a lot of measuring and chalking out to get the position of the shapes from the design. The walls are 8m tall, the side is 11m and the front is 8m wide. My beautiful assistant helped fill in the large areas. I then went over with details and carefully mixing all the right colours.

She came and helped and painted an upside down pigeon at our request. That’s what real friends are. 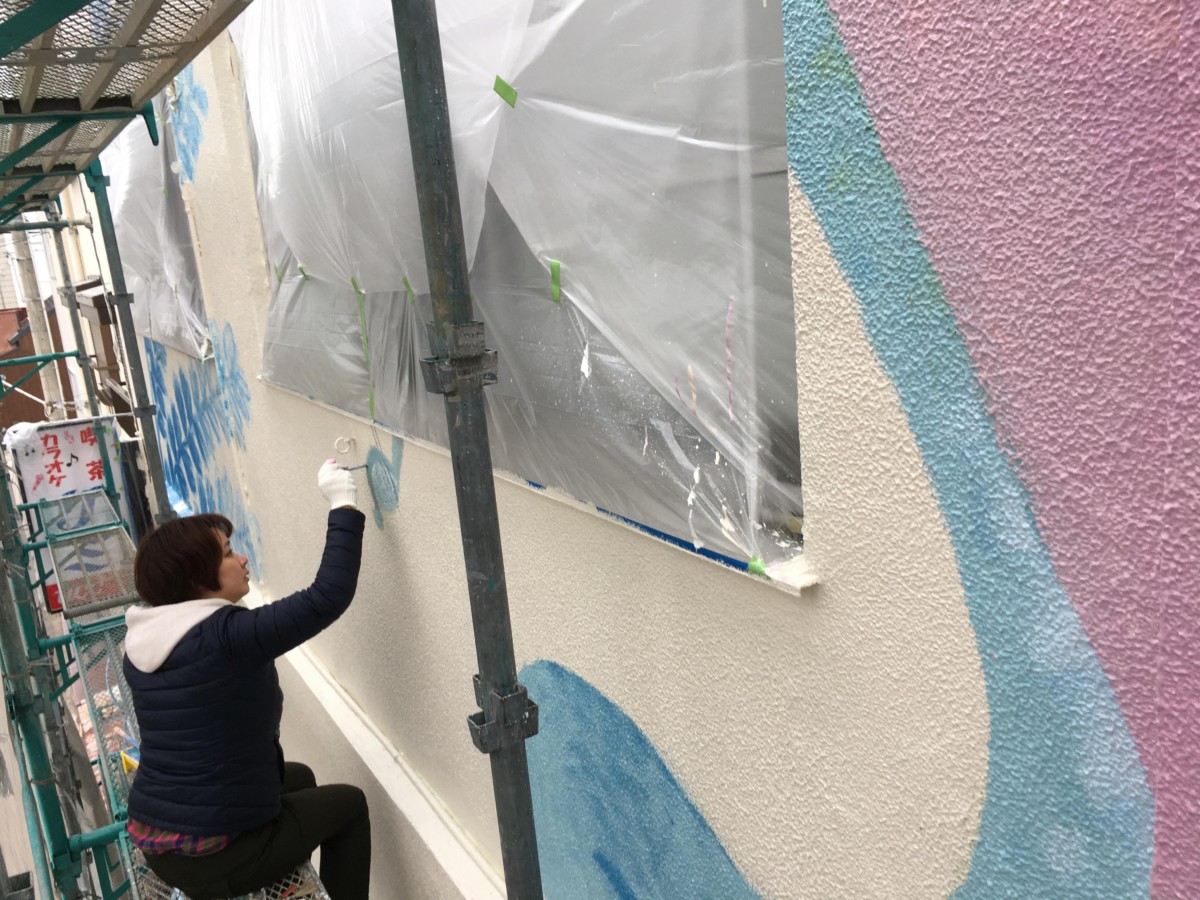 We had this big curtain up (safety) the whole time so couldn’t check the balance or overall look . This is the paint shop guy he came by and was also impatient to see the mural so he said ‘lets take it down now’ so we did. 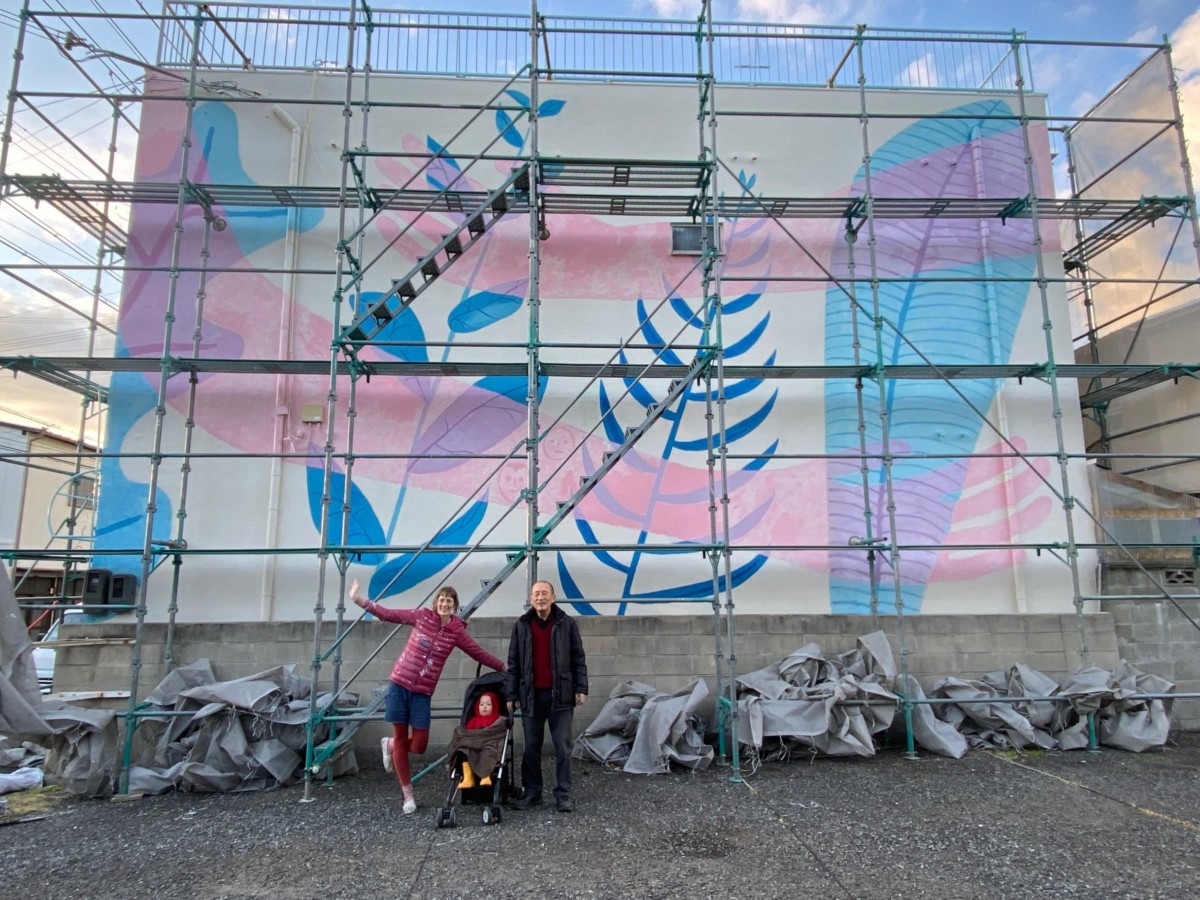 Its lucky I wasn’t scared on the scaffolding at all. The rope bridges in Tokushima terrify me , I can’t explain why.

I have two sons so here they are tattooed on the arm. 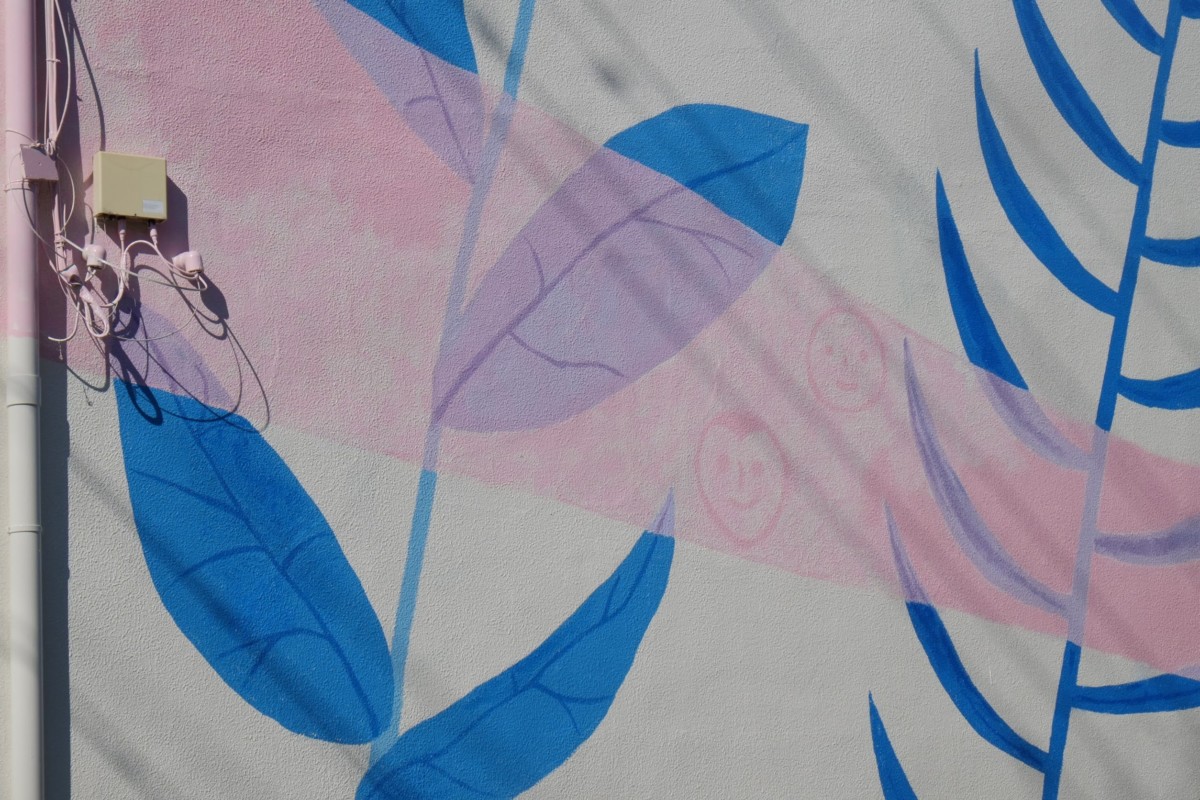 The wall is textured. 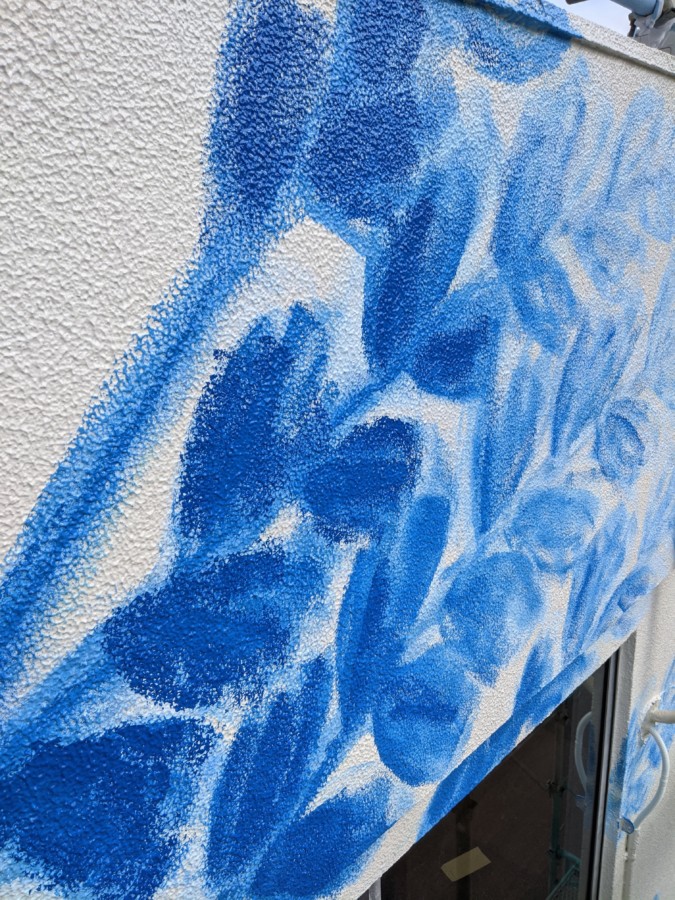 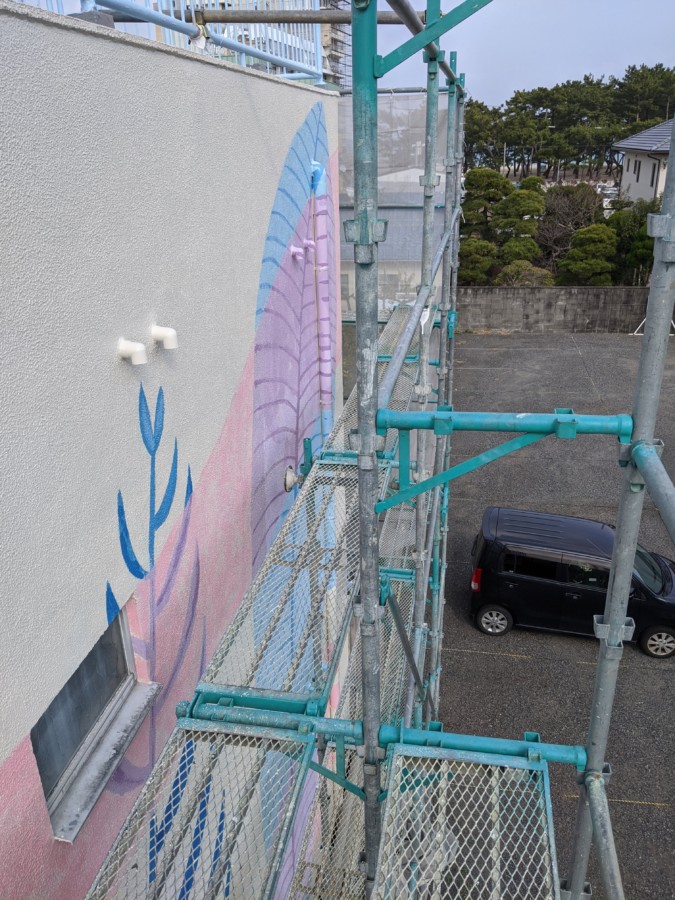